Any project, product, or idea, no matter how good it might be, needs marketing. You could be sitting on a million-dollar idea, but if no one has heard about it, it becomes worthless. Marketing is a science on its own and sometimes requires years of studying for someone to grasp the concepts of marketing, but that is what we call traditional marketing.

The marketing we are going to talk about today doesn’t require years of education and training. It requires guts, imagination, the ability to think outside the box and not a lot of money. Traditional marketing has its use, of course. Your company has built up a reputation for itself, your consumer base is already established, and your goal is to maintain that with the occasional promotion of new products that you have to offer? Then traditional marketing would work for you, it might be costly, but it is effective.

Guerilla marketing is an unconventional method of advertising, often used to draw as much attention for your product/brand instantly without investing a fortune.

While it doesn’t require a lot of money, this method requires a lot of planning and creativity when coming up with the perfect idea and execution plan. It almost always repurposes the consumers’ environment and is often interactive.

The goal is to catch the audience by surprise, causing them to be both confused and intrigued, so in the midst of the amazement or curiosity, they might spread the advertisement either by word of mouth or over social media. Do you know the saying “any PR is good PR”?. Well, guerrilla marketing absolutely embodies it. Although there are no rules, before launching your first guerilla marketing campaign, you will need a lot of preparation and make sure that your idea has fulfilled the following requirements:

Here are some of the most interesting current guerrilla marketing tactics:

Probably the most common and most efficient type of guerilla marketing is street marketing. In big cities, thousands of people walk the streets every day. Whether it is tourists exploring the city or locals on their daily commute, the streets are always busy. What better way to get a ton of exposure than by placing your advertisement onto the busy street? The advertisement can be incorporated into something already existent on the street or be displayed on its own.

Incorporating it into a popular monument is an easy way to profit from the monument’s popularity. That is, if doing that won’t lead you into trouble with the local authorities. A fun way to make your advert more interesting is to make it interactive, which is very easy to do in street marketing. People are curious and love to feel like they are a part of something, so an advert that will require some form of action from them is a sure way to make them feel included. 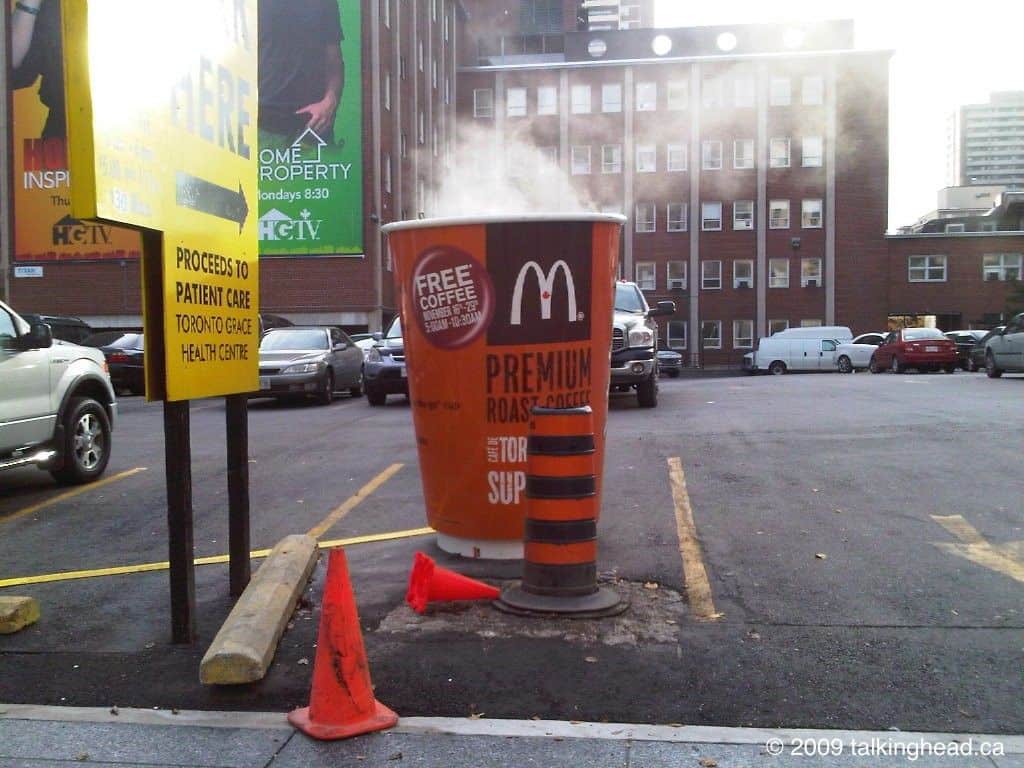 Your guerrilla marketing strategy can include improving existent spaces like park benches, metros, bus stations, interiors of trains, buses, and waiting rooms. Let’s say you are in the furniture business. Putting one of your pieces at a bus stop would surely give the wanted attention to your product and make waiting for the bus a much comfortable experience for the commuters. 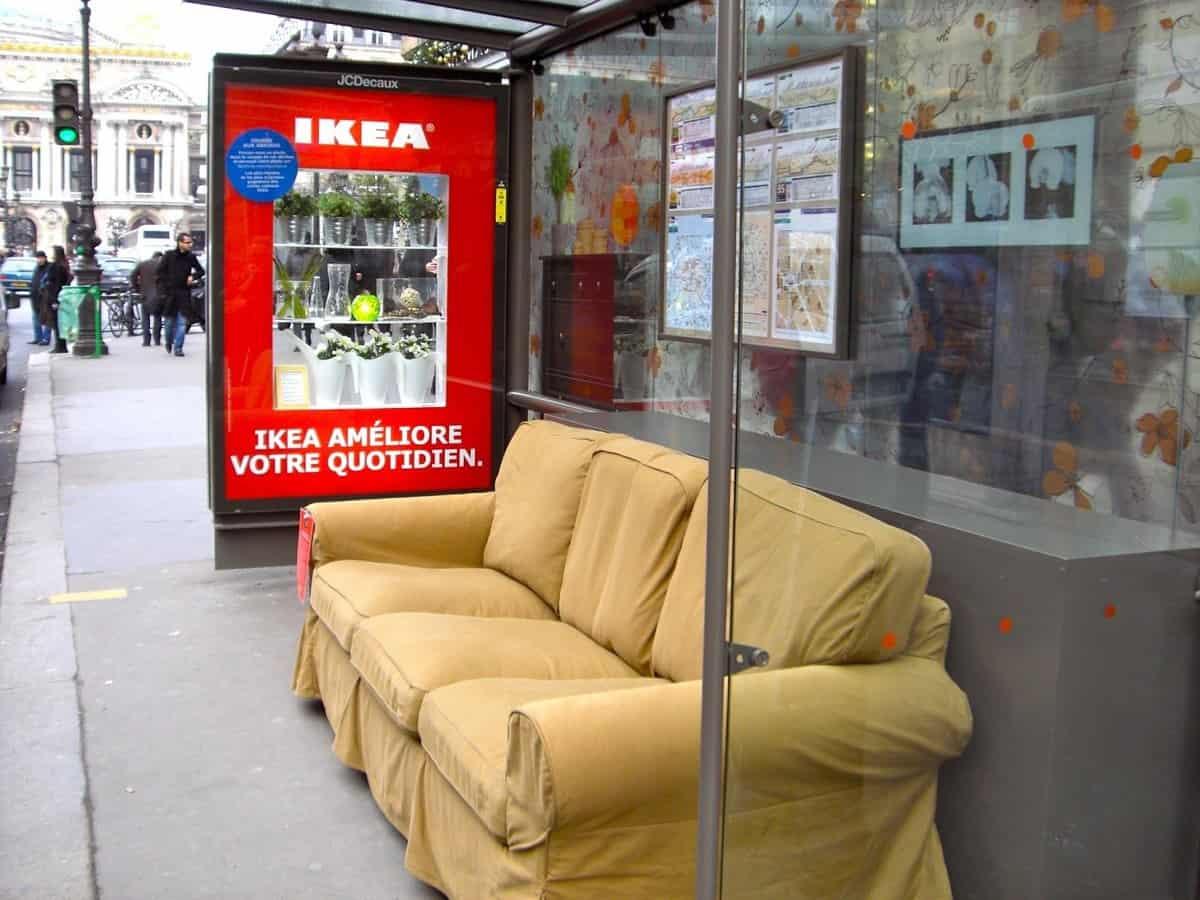 If you are really on a budget, then consider doing your guerrilla marketing campaign with video projection on a prominent building or monument. This method is very cheap but also risky. Depending on the contents of your advertisement and the building you use as a projection screen, you might end up in some trouble, so be cautious.

To get a spot in the commercial break of big events such as the Superbowl or some football championship game will sometimes cost brands millions. Even when paying such a high price, they will have to make sure that their ad abides by strict guidelines set by the event organizer. Paying a huge price and playing by the rules is definitely not part of the guerrilla marketing mentality. But getting the exposure as big as an ad at the World Cup is necessary when you want to skyrocket the popularity of your brand in an instant. 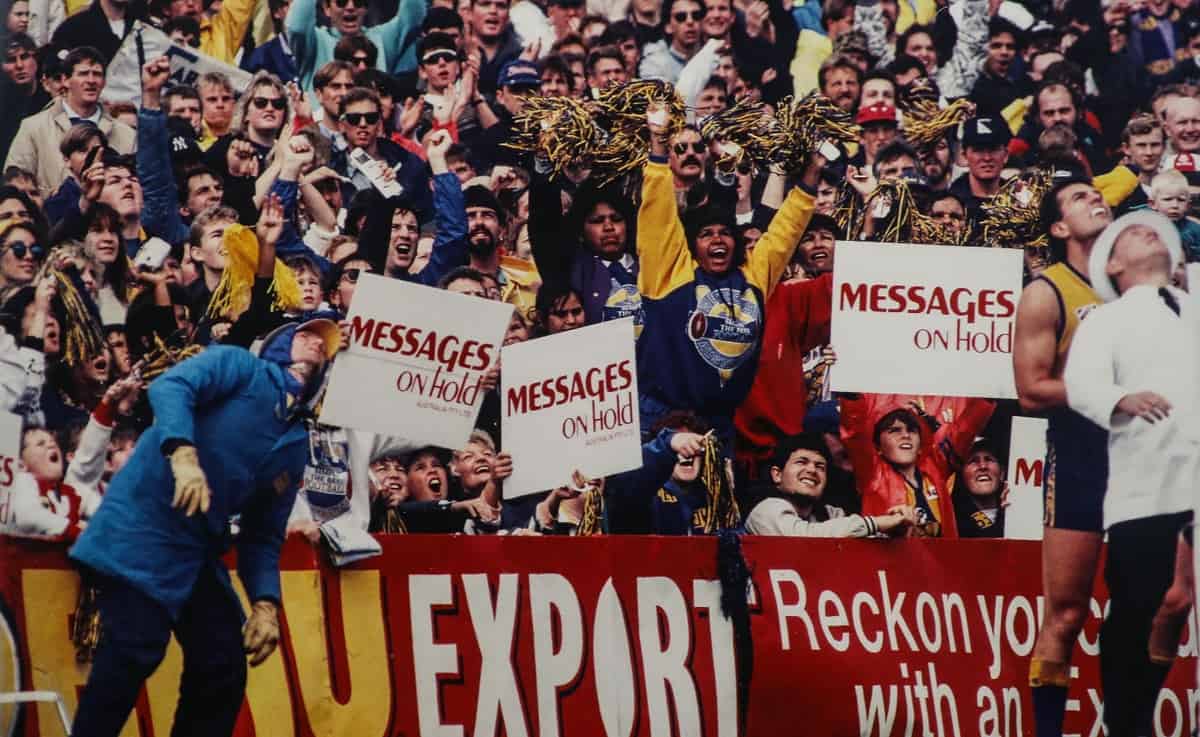 So how to present your product on your own terms without breaking the bank? Well, by breaking some rules. You will have to think of a way how to get the spotlight at a big event. Usually, it’s by doing something a little outrageous, like running onto the field while dressed in your company’s branding, for example. It will, for sure, be appreciated by the majority of the audience, but it might lead you into serious trouble with the organizers and possibly the legal authorities. So make sure your plan is worth the risk.

Unlike street marketing, where the aim is to put your advertisement in the busiest place possible where it would garner the most traction, doing the reverse can have the same effect. Ambient marketing is placing your ad in an unusual or unexpected place. We are all used to seeing billboards, and they often don’t leave a long-lasting impression. But if you saw a cleverly placed ad while using a public bathroom or while opening a door, the chances are that you are going to remember it. The human brain is programmed to notice small details and irregularities.

If you want to take advantage of that, then subtle and/or unusual is the way to go. A cheap and easy way to do is with stickers and deceptive drop cards. Just try and make them as environmentally friendly as possible since you are creating a bit of waste. A very “green” method of ambient marketing is reverse graffiti, created by simply removing surface dirt on a building or street in a wanted stencil by using a high-power washer. 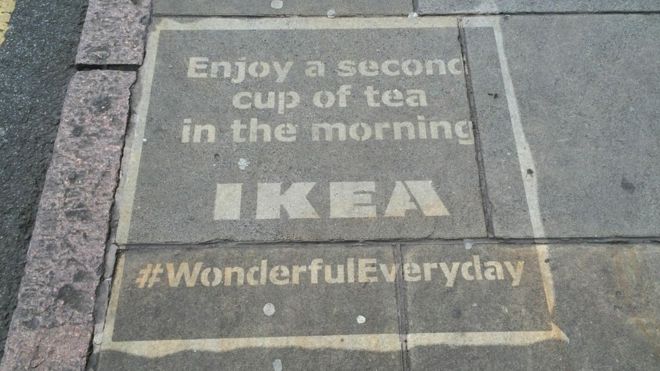 Often no matter the product or how good the campaign is, it’s hard to get people to pay attention. That’s when you need to spice up your marketing. Being controversial is a marketing strategy as old as time, and if one thing is for sure, it’s that people love to argue. Opposing someone’s arguments or challenging their personal beliefs, in most people, awakens a need to stand up and defend their opinion. Although this tactic might not be the most enjoyable for either side, it is a chance for you to take the attention you got from a person by intentionally provoking them and diverting that attention to your product or in some cases, a noble cause. 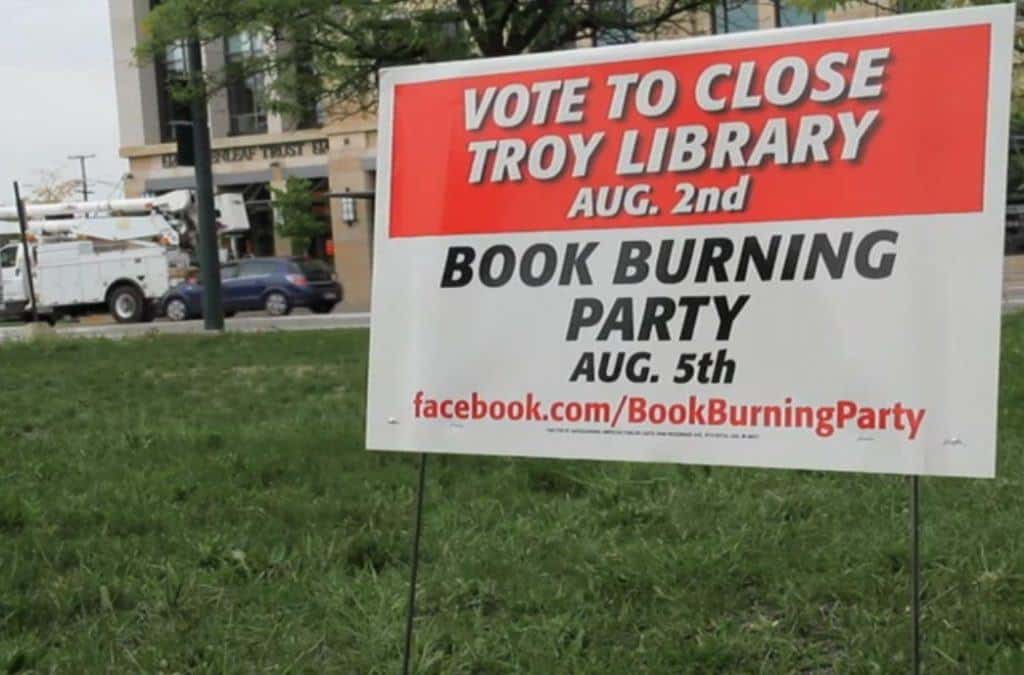 One of the best examples is how a library in Troy, Michigan, was saved from being shut down by advertising for a “book burning party” in celebration of it shutting down.

Another human trait that could be beneficial for your guerilla marketing campaign is curiosity. Not giving too many or any details in your campaign will often leave people wanting to know more. This can be achieved by using a simple but captivating ad or by plastering a website link/ hashtag/ QR code in as many locations as possible. While the real advertisement is clearly displayed on a website, a QR code, for example, will simply be a bait leading to it. This method might not require as much creativity as the others, it requires strategic placement, a lot of exposure, and it must be captivating enough for the consumer. 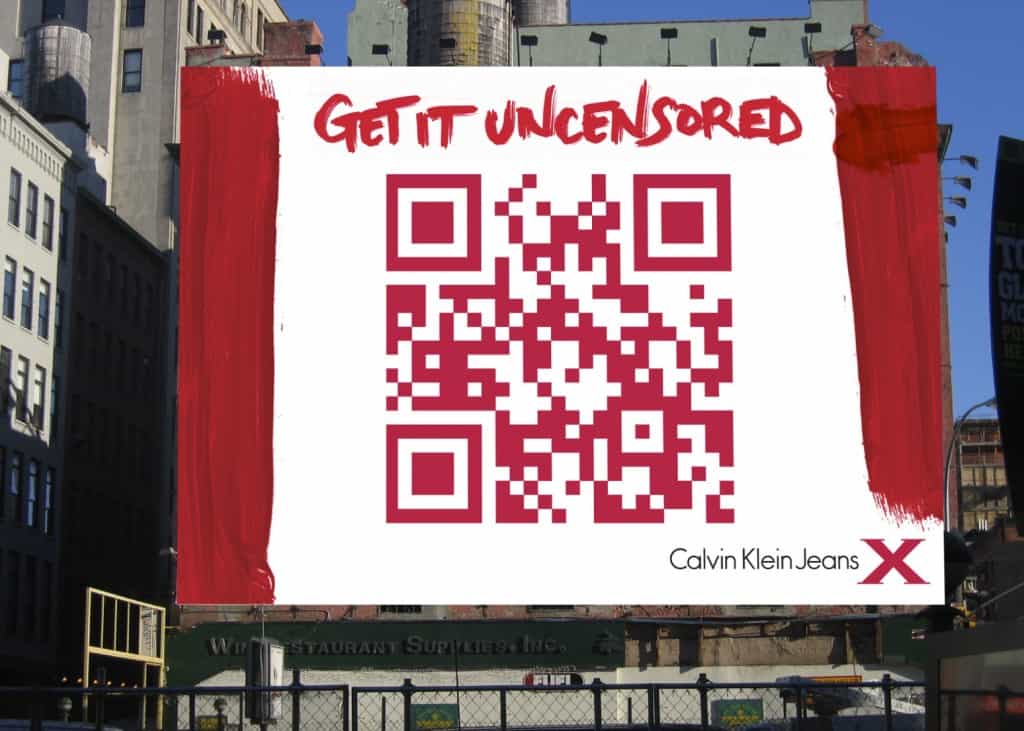 Creating a filter for Snapchat/Instagram/Facebook with your branding incorporated is one of the easiest but extremely efficient ways of advertising. If the filter is creative enough, there is no doubt it will spread like wildfire over social media.

Mass changing of profile pictures is a pretty easy way to cause intrigue among social media users. If your company has a significant number of employees, then you could give them the task of putting the same profile picture for a short period of time, or simply find a sufficient number of people willing to do that for a small financial compensation.

Booking influencers to promote your product or sending them your product unusually packaged will surely draw the attention of a part of their extremely loyal fanbase to your company.

Using hashtags is a tried and true way of advertising over social media. Although you can use them on various platforms, Twitter is the main platform where hashtags become viral.

A very famous example of guerilla marketing on social media that unfortunately ended in a disaster was for the “Fyre festival.” Some of the biggest influencers and names in the modeling industry posted a picture of an orange background with the hashtag #FyreFestival and a link for the ticket sales. Even though most of the details of the festival weren’t even posted, the tickets sold out immediately. The scale of the festival grew exponentially, but the realization was far beyond the capabilities of the organizers resulting in thousands of people stranded on an island without appropriate accommodation or food. You can find out more about the festival that never happened but had one of the best social media marketing campaigns by watching Netflix and Hulu documentaries. 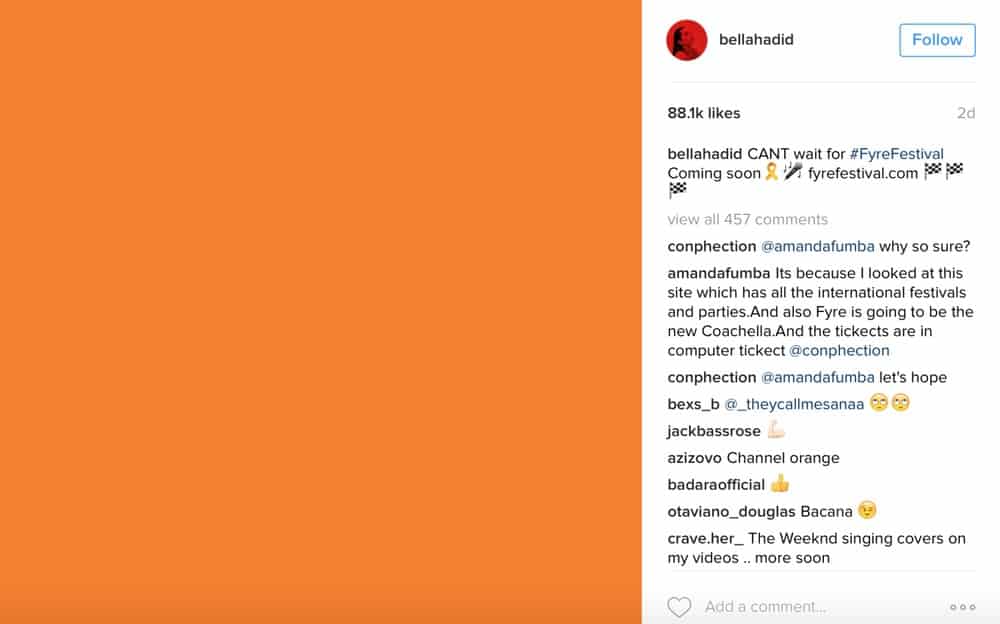 All the above-mentioned tactics have their use. Some might be perfect for your product, and some might just not be what you are looking for. How to decide on one? Well, who said you had to choose only one? Combining a multiple of tactics could be a recipe for the perfect marketing campaign.

Like I already said, guerrilla marketing has no rules; you are the only one deciding what is acceptable for you and your product. If you are on Instagram and trying to develop your online marketing strategies, it’s pretty fine to try different plans. The goal is to get the maximum exposure to your content so you can make the most profit for your business. You may try to put quality content or try to get free Instagram followers. It’s ok as long as you can achieve the success you have desired.

So intrigue over social media, ride the wave of a current trend, partner with businesses, throw publicity stunts, whatever it takes to spread your message across.

Now that you have learned about the top tactics of guerilla marketing and seen some of the most interesting examples, here are some things you should be aware of and keep in mind when planning your campaign.

A lot of the time, guerilla marketing projects depend on the location, so making sure your advertisement isn’t prone to damages from the environment it’s put in, and possibly bad weather conditions is crucial.

Be certain that your advertisement is not a public safety risk. This might seem funny, but it happened more than once that a guerrilla marketing installment caused worry amongst people. For instance, once LED boxes intended for the promotion of an upcoming TV show were mistaken for explosive devices. The advertisement definitely drew attention, but not the best kind.

Your guerilla marketing project must work on the first try. The biggest element of these projects is the element of surprise. Publicly executing something multiple times removes that element from the equation. No matter which tactic you go for, if executed correctly, it will most certainly be effective. At the end of the day, guerrilla marketing is disrupting the monotony in the average person’s everyday life and their environment, which is a certain way of getting anyone’s attention.

I am a software engineering student from Bosnia and Herzegovina, currently working on my thesis. In my free time, I like to listen to podcasts and watch YouTube videos on all sorts of topics. I love anything, tech, fashion or travel-related.